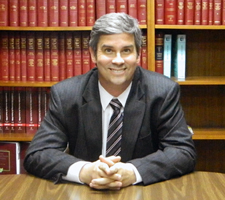 He attended Ohio County Public Schools and is a graduate of Wheeling Park High School. He obtained a Bachelor of Science Degree in Biology from Bethany College; a Master’s in Business Administration from West Virginia University, a Master’s Certificate in Federal Government Contracting from WVU and the Federal Market Institute and a Juris Doctorate from WVU.

While at Bethany he was employed as Assistant Manager of a Conference Center catering to Fortune 500 Companies and among other honors was one of only 20 students selected to meet and have lunch with President Gerald Ford. Upon graduation from College he joined Wheeling Hospital and served in various capacities including Budget Accountant, Information Systems Analyst, and Patient Accounts Manager.

He was the first Director of Finance and Administration for the Center for Educational Technologies and National Technology Transfer Center at Wheeling Jesuit University. There he developed the personnel, accounting, and contract management systems. He was also instrumental in securing and administering grants, cooperative agreements, and contracts totaling over $100 Million. He was the program Manager for construction of the $13.5 million National Technology Transfer Center facility, and served as Facility Security Officer and Contracting Officer.

He has been self-employed as a consultant, where among other projects he was the Project Coordinator for construction of the Robert C. Byrd Intermodal Transportation Center in Wheeling, a Senior Associate with the Federal Market Group, an adjunct professor in the Masters and Undergraduate Business Programs at Wheeling Jesuit and a lecturer on Federal Government Contracting at George Mason University.

In the local community he coached flag football, basketball, and roller hockey in YMCA programs. He is a past President, past Board Member and a past Officer of the Wheeling Lions Club, Vice President, Secretary and Coach in the Warwood Redbirds Baseball Association, Vice President of the Viking Involved Parents Booster Organization at Warwood School, and Founder and Director of the Tri-State Basketball Challenge -the area’s largest Middle School Basketball Tournament.

Erik was the first Wheeling Park alumnus to be elected to the Ohio County Board of Education and the first to be elected President of the Board.  He led the Ohio County Schools first capital campaign for the construction of the J.B. Chambers Performing Arts Center.  He and his wife Sharon also established the Warwood Middle School Band Scholarship.  He is also a past Board Member and Foundation Member of the Sandscrest Episcopal Church Conference Center.

Mr. Schramm is married to Sharon.  Their son Erik, Jr., is an attorney with the firm.  Their son Stephen is a teacher at Martinsburg, WV High School.  And their youngest son Alex is an Engineer with Mountaineer Gas with his office in Wheeling.

Currently, Mr. Schramm remains involved in the community and serves as President of the Estate Planning Council of the Upper Ohio Valley.